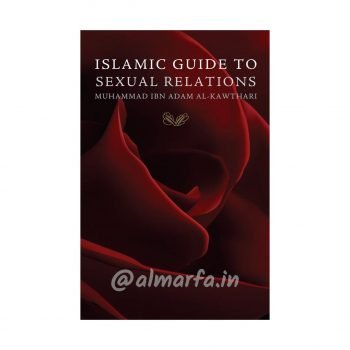 General Books, English
English
₹250.00
Fulfilment of sexual desires and needs is essential in sustaining a harmonious martial relationship. However, in today’s society, sexual boundaries are being pushed further and further, and often, sexual deviance is openly practised. In such circumstances, there is a need to identify which sexual activities are permissible in Shari’ah.
Add to wishlist
Add to cart
Quick view
New Health, English, General Books, English, Learning, English
₹340.00
Enjoy your life by Dr. Muhammad Abdul Rahman Al-Arifi is a book on the exquisite and inspiring collection of incidents from the lives of the Prophet (PBUH) and his companions, stories from our Islamic Heritage, and thought-provoking anecdotes from the life of the author. In the author's opinion, to enjoy your life, you must work on self-development in the light of Islam.
Add to wishlist
Add to cart
Quick view
HotNew Aqeedah, Urdu
Urdu
₹1,200.00
Monotheism is of fundamental importance in Islam. Allah (swt) sent prophets and messengers and revealed books to spread and protect this fundamental ideology. This is the proof of the greatness of the doctrine of Tawheed that for the sake of its propagation, the chosen servants of Allah, the Holy Prophets and the Salaf of the Ummah endured great hardships and performed this duty in this way without any mediation or reconciliation. I tried hard. In view of the value and status of the doctrine of Tawheed, the scholars of the ummah in every age have put its description and explanation at the forefront of their writings and have written permanent books on this subject. The efforts of Jah Nawab Syed Muhammad Siddiq Hassan Khan Ballah (2-9 AH) in the field of Nussrah and propagation of Islamic sciences and Salaf faith in the subcontinent are as clear as day. In this regard, you yourself have donated as many books as you need, the number of which exceeds two hundred, and also attracted other scholars to write and compile, arranged special scholarships for them and the original sources of Islamic sciences and arts. He made extensive arrangements for the reprinting and publication of the source, which in his time proved to be a blessing in disguise for the scholars and students of religion.
Add to wishlist
Add to cart
Quick view
Sold outNew General Books, Urdu
₹200.00
There is an element of love in one or another area in everything in the world. If you carefully study and observe all the creatures of the world, look at their interrelationships and interdependence, then you will realize very well that there must be something or other inside each and every thing, which is different from each other. Help and support, brotherhood and brotherhood, kindness and gentleness, compassion and empathy, is provoking the reconciliation and that is the love and compassion hidden in the deepest depths of the heart.
Add to wishlist
Read more
Quick view
New Hadith, Urdu
Urdu
₹350.00
The nation in which Allah Almighty revealed His favorite and last religion was the uncivilized nation of Arabia, but it also has some human values ​​which are clear examples of high morals and character such as tolerance, hospitality, truthfulness, loyalty and fidelity. There were, as well as some God-given abilities, strength of memory, quick wit, self-control and courage, courage and fortitude, courage and fortitude were also present in them, very tough, tough temperament and hard soul Were Tribal bigotry was at its height, the honor and dignity of the tribe, its greatness and grandeur was the greatest purpose of life, they died on obedience to the orders of the chief, They could not bear to hear against it.
Add to wishlist
Add to cart
Quick view
-20%New Fiqh, Urdu, Namaz, Urdu, General Books, Urdu
Urdu
₹180.00
The Urdu translation of “Sharh Usool e Salasa” is a gift to the readers. As far as writing something about the book is concerned, I do not consider it necessary at all because the attribution of this book to authoritative and authoritative personalities like the author and commentator is the only guarantee of its authenticity and usefulness. It is not possible for a person of fair temperament to read this book beyond prejudice and to have a careful view of the author and commentator, his breadth of knowledge, his influence and his heart. Don't get me wrong That Sharh-e-Thalas-ul-Asool should be presented in different languages ​​of the subcontinent in view of its general usefulness. Respected Dr. Rezaullah Mohammad Idrees Mubarakpuri Hayyand (Lecturer of Salafi University, Banaras) sought advice.
Add to wishlist
Add to cart
Quick view
HotNew Seerah, Urdu
Urdu
Rated 5.00 out of 5
₹60.00
Maulana Ghulam Aali Kasuri (d. 5 AH) was the first to write about the conditions of life of calling Imam Ibn Taymiyyah in Urdu. ۔ Then Maulana Altaf Hussain Hali (AD) paid attention to writing about his situation in almost a year, but could not write more than four pages. The draft was received by Sheikh Muhammad Ismail Panipati.
Add to wishlist
Add to cart
Quick view
New

Fiqh, Urdu, Namaz, Urdu, General Books, Urdu
Urdu
₹80.00
Imam Ahmad ibn Hanbal Walin (5 AH) wrote various treatises in defense of the Salafi faith which was the belief of the Salaf. Imam Ahmad had to face the government to clarify these beliefs and We had to endure hardships, trials and tribulations. Around the first and second centuries AH, a number of erroneous ideas came to the fore. Ja'd ibn Durham and Jahm ibn Safwan derived their beliefs from al-Shaminiya and are also called al-Shaminiya. Were Abu Rihan Muhammad ibn Ahmad al-Biruni in his book “Tahaqiq ma llind min maqolat maqolat al-aql o mazdolat p. The position of the Salaf was that when the followers of Bid'ah and the people of Atheism expressed their false belief, the Salaf would express their belief and their purpose was to show the false doctrine of the followers of Bid'ah I will prove it.
Add to wishlist
Add to cart
Quick view
New Fiqh, Urdu, Namaz, Urdu, General Books, Urdu
Urdu
₹80.00
Verily, Allaah sent Muhammad (peace and blessings of Allaah be upon him) with guidance and the religion of truth, so that He might make it prevail over all religions, and He revealed to him the Book and Wisdom. That you may make clear to the people what has been revealed to them, that they may reflect and be guided and that they may be successful. So both the Book and the Sunnah are in fact with which Allah Almighty has established an argument against His servants and on both of them the basis of doctrinal and practical rules in command and prohibition (positive and negative) is laid. The one who argues from the Qur'an needs to consider only one thing, what is its ruling, it does not need to think in order to be established, because it
Add to wishlist
Add to cart
Quick view
New Hadith, Urdu
Urdu
₹110.00
The hadith is also the book of Allah. Sayyid and Ayesha say that Barira came and said that I have written to my masters on nine (9) ounces, I have to give one ounce every year. If you like your master, I will give them all at once and set you free, but the condition is that your will will be mine, but they went to their masters, they refused and said The Prophet (peace and blessings of Allaah be upon him) said: “O 'Aa'ishah! Take him and set him free. Then the Messenger of Allah (peace be upon him) stood up to deliver a sermon among the people and praised Allah and then said: What about those who make conditions which are not in the Book of Allah? Any condition which is against the Book of Allah is invalid even though there are good conditions. The villa belongs only to the man who freed the slave Yalondi.
Add to wishlist
Add to cart
Quick view
Load more products
Loading...
Shopping cart
close